It was a rainy day on Sunday in the Bay Area, which made it a perfect day for soup. I decided to try using dried beans, which turned out to be much easier than I expected. You can find much more variety in dried beans than canned, and they have this wonderful sort of al dente bite to them when cooked, versus canned beans which can be a little mushy. Having said this, I have shown how to modify the recipe below if you are in a rush and want to use canned. All it took to use the dried beans was to throw them in a pot with some water in the morning and let them sit until I made the soup that evening. Then, you just simmer the soup for longer than you would with canned beans, which is usually fine with me on Sunday evening as I'm usually at home preparing for work for the week. Another great thing about this soup is that it makes a big pot and tastes arguably even better over the next few days as leftovers. 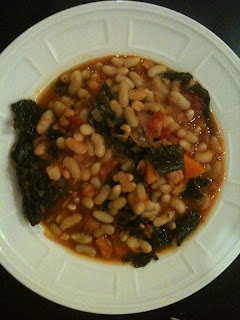 If using dried beans, soak for at least 4 hours or overnight (I just soaked them starting in the late morning and cooked the soup the same evening). When ready to make the soup, drain and rinse the beans.

In a large dutch oven or pot, heat 1 T. olive oil over medium heat. Add the onion, leeks, garlic, and a pinch of salt. Saute until tender but not browned, about 5 minutes.

Add the carrots and the can of tomatoes (plus their juices) and stir to combine. Add the dried beans or canned if using. Add the vegetable stock and the whole thyme sprigs and bay leaves (the thyme leaves will just dissolve off of the branches as the soup cooks). Add 1 t. kosher salt and 1/2 t. of the pepper. Bring the soup to a low boil, then cover and simmer for 2 hours if using dried beans or 30 minutes to 1 hour if using canned beans, stirring occasionally (the more time the better!).  About 30 minutes before the soup is done (1 1/2 hours into the simmering process for dried beans, anywhere from right away to 30 minutes later for canned beans, depending on how long you're planning to simmer it), add the kale or swiss chard and stir well into the soup to combine. Recover and simmer for the remaining time. Taste for seasoning - I found that since I used low-sodium broth and it was a large pot of soup, I needed an additional 1 t. kosher salt and 1/2 t. pepper.

We liked this soup on its own but it was especially delicious with some grated or shaved parmesan cheese on the top!
Posted by Kate Messmer Wendt at 2:48 PM