I was having my good friend Sara over last night and wanted to make her something especially wonderful for dinner. She loves fall flavors like yams and sweet potatoes but also loves Mexican food. I have developed a great vegetarian enchiladas recipe that I make in the summer with corn and summer squash, and thought, why not make the fall version? The combination of yams, chard, black beans, and queso fresco in the filling is so good, we had no problem polishing off 2 enchiladas each. This recipe does take a little time because you have to roast the yams first and then assemble the enchiladas, but you could always roast the yams a day ahead of time and keep them in the fridge until you're ready to make the dish, or make the entire thing a day ahead of time and just pop it in the oven when you're ready to serve it. 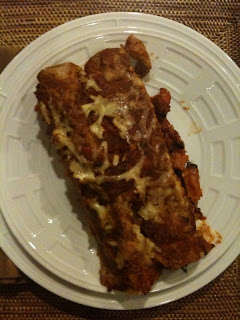 
Extra virgin olive oil
4 cloves garlic, minced
3 T. flour
2 c. low-sodium vegetable stock
15 oz. can fire-roasted tomatoes with chiles (you could also use canned fire-roasted or plain diced tomatoes and add a small can of green chiles)
1 T. ancho chili powder
1 ½ t. ground cumin
4 oz. queso fresco (Mexican cheese)
15 oz. can black beans, rinsed and drained
2 lb. garnet yams (about 3 medium or 2 large yams), peeled and cut into ¾’’ pieces
1 bunch rainbow or swiss chard, leaves only, rinsed and roughly chopped (save the stems for another use - coming soon!)
8 whole wheat tortillas
4 oz. pepper jack cheese, grated
Light sour cream, for topping (optional)
Kosher salt
Preheat the oven to 425°F. Toss the cut yams in a large bowl with 2 t. olive oil and season with ½ t. salt. Transfer the yams to a baking sheet and spread in an even layer. Roast the yams until tender, approximately 45 minutes.
Meanwhile, make the enchilada sauce. Heat 2 T. olive oil in a medium-sized saucepan over medium heat. Once the oil is hot, add the garlic and sauté until fragrant, approximately 30 seconds. Add 3 T. of flour to the pan and whisk together with the garlic and olive oil. Continue whisking and cook for about another 30 seconds or a minute more to allow the mixture to cook a little. Gradually add in the 2 cups of vegetable stock, whisking constantly to ensure a smooth consistency. Bring to a low boil, then reduce the heat to a simmer and stir in the diced tomatoes and their juices, chili powder, and cumin. If using low-sodium stock, add 1 t. of kosher salt. Allow to simmer for 10-15 minutes to thicken a little, stirring occasionally.
Heat 1 t. olive oil in a large sauté pan or stockpot over medium heat. Add the chard, cover, and cook for approximately 5 minutes or until chard is wilted, stirring occasionally. Season with 1/4 t. kosher salt and set aside in the bowl you used for the yams.
When the yams are done, pull them out, and decrease the temperature of the oven to 375°F. In the large bowl containing the chard, add the black beans (drained), cooked yams, and queso fresco cheese, crumbling as you add it. Stir together to combine. This is the filling for the enchiladas.
Put the stack of tortillas in between two sheets of dampened paper towel on a plate and microwave for approximately 1-2 minutes or until warm. This will make it easier to assemble the enchiladas. Grate the pepper jack cheese if you have not already done so.
Grease a large rectangular baking dish (I used a 4.5 qt Pyrex, one size larger than a 13x9x2 but use whatever you have that you think you can fit 8 enchiladas into). Get all of the components in one area for easy assembly (the baking pan, the filling mixture, the tortillas, the saucepan with the sauce, and a plate). To begin, spread approximately ½ cup of the sauce on the bottom of the baking dish to lightly coat it. Begin filling the tortillas one at a time. I do this by placing one tortilla on a plate, then scooping out 1 cup of the filling mixture and putting it along the middle of the tortilla. Then, roll up the tortilla as tightly as you can (no need to fold in the edges) and put it in the baking dish, starting with one edge, and repeating this process until all 8 tortillas are packed tightly together in the pan.
Top the tortillas with the remaining sauce, spreading the sauce around to cover the tortillas as well as possible. Top with the pepper jack cheese.
Bake, uncovered, for 45 minutes, until the dish is bubbly and cheese is melted. Serve with a dollop of sour cream, if you’d like.
If you made this recipe ahead of time and had it in the fridge, take it out of the fridge while the oven is preheating and cook for approximately 50 minutes.
Posted by Kate Messmer Wendt at 6:39 PM