It's been about 2 months since my last post and I hope that will be the longest gap by far that I'll ever have away from this blog! Between a big promotion at work, buying a house, and moving from the Bay Area to Seattle, I can say that I am certainly coming out of one of the busiest periods of my life, which didn't leave much time for either cooking or blogging. Fortunately, now that we're getting settled in Seattle (we just made the big move last week), I'm planning to re-balance and get back to the cooking and creating that I love. My recipes are also apt to become even more seasonal, as the Northwest has true seasons as opposed to California which never really gets a winter and has very extended and different growing seasons. In the short time that we've been in Seattle the weather has actually been beautiful with little rain, and I have to say that I missed the fallen leaves and crisp, clean air. It also makes you want to roast, bake, and make soups. Even with our kitchen a little bit of a mess with the move-in process, I was able to easily whip up this simple, delicious soup (which also happens to be vegan). A great one for the weeknights served with some good bread. 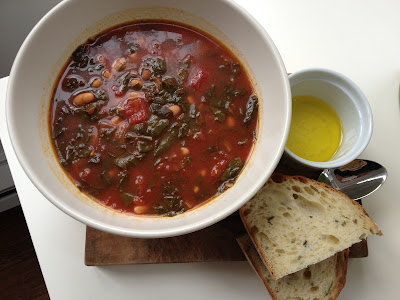 Heat a large stockpot or dutch oven with the tablespoon of olive oil over medium heat. Add the garlic and chard stems and cook, stirring occasionally, until stems start to soften, about 3-5 minutes. Add the tomatoes with their juices, the drained beans, red pepper flakes, the vegetable stock or water w/bouillon and 1 t. kosher salt. Bring to a near-boil, add the chard stems, and stir until they start to wilt and become incorporated into the soup, a few minutes. Reduce the heat to low and simmer for about 25 minutes, or even longer if you have the time - it only gets better. Stir in the balsamic vinegar, add some freshly ground black pepper, and taste for seasoning (my bouillon cubes were no sodium so I added another 1 1/2 t. of kosher salt). This recipe is also great reheated the next day.

Posted by Kate Messmer Wendt at 11:57 AM