It's a little rainy here in Northern California, which is to be expected in the Spring and we certainly need it after a very dry winter. On days like these, I tend to feel like something warm and comforting for dinner, but still healthy. This pasta dish features a nice balance of vegetables (artichokes and in-season spinach) with ricotta instead of a heavy (and time-consuming) bechamel sauce. I also simply broil it at the end with some parmesan cheese on top to create a nice golden crust, saving the hassle of having to bake it for a long time like other baked pasta dishes. I used brown rice penne (found easily at Trader Joe's or Whole Foods) in this dish, which I think has just as good of a texture as regular pasta, but some more nutritional value than regular white pasta and also provides a different grain source than wheat. Having said this, regular or whole wheat penne would also work great here. 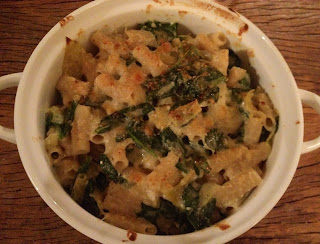 Heat a pot of salted boiling water, add the pasta, and cook until al dente (according to package directions). Meanwhile, prepare the artichoke hearts, spinach, and parmesan cheese. Reserve about 1/4 c. of the pasta water, then drain. Return the pasta to the pot and add in the spinach and pasta water. Stir for a minute or two until the spinach starts to wilt, then add in the ricotta, artichoke hearts, 1/2 t. salt and some freshly ground black pepper. Stir to combine well. Put the oven on broil. Transfer the pasta mixture to either one 8x8 inch baking dish or 2 individual smaller gratin dishes. Top with the parmesan cheese, then broil until the top gets golden brown (watch it with the oven light on to make sure it doesn't burn). Remove from oven, wait a minute or two for it to cool slightly, then serve.
Posted by Kate Messmer Wendt at 9:00 AM