Heirloom tomatoes are hitting their peak right now in California, which means not only that you can find some huge, juicy, wonderful tomatoes, but also that they're relatively cheap. When tomatoes are this good and this abundant, gazpacho is a great way to highlight their flavors and create a great summer dinner, appetizer, or lunch. I made this into a meal by topping it with chopped avocado, tomatoes, and cucumber, and creating the soup with a base of a little bit of bread like the Italians do. Plus, perhaps the best part of this soup is that you make it in a food processor or blender, so prep time is minimal. I thought I liked the chunky version of gazpacho, but always felt like it ended up tasting like you're eating a big bowl of salsa. This version still retains some texture and is full of flavor, but feels like soup. Like many soups, as the flavors combine, it's even better the next day (if you still have any left over:) ). 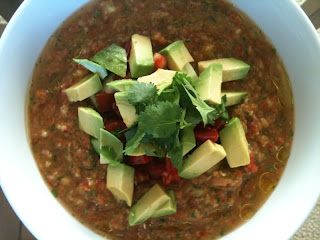 Heirloom Tomato Gazpacho
Serves 4 as a main dish, 8 as an appetizer

In a food processor or blender, drizzle the bread with olive oil, vinegar, garlic, cumin, and cayenne pepper and let sit while you prepare the other ingredients. Add half of the chopped tomatoes, cucumber, red pepper, shallots, basil, and cilantro, and blend with the soaked bread and spices, until relatively smooth but still retaining a little bit of consistency. Transfer to a large bowl, puree the other half, and add it to the bowl. Season with about 1 1/2 t. kosher salt and lots of freshly ground black pepper, then chill for at least 30 minutes. Serve topped with the diced tomato, cucumber, avocado, cilantro and a drizzle of olive oil.