Swiss chard is available most places year-round, but actually hits its peak in the late spring and summer months. You'll find red swiss chard, green swiss chard, and rainbow chard popping up more in the grocery store and at your farmer's market in the coming months. Swiss chard is a good leafy green for those people who aren't big kale fans but don't always want to each spinach to get their dark leafy greens. I actually much prefer the flavor of chard to spinach and often use it in recipes. In this case, I used red swiss chard as it looked the best that day, but rainbow chard would also work well here. I also love that this recipe uses the entire stalk - not just the leaves.

I've experimented a lot with different oven temperatures and cooking methods to try to get pizza dough  to cook all the way through and get a good crust. I think I have finally learned the trick - use a higher temperature (500 degrees Fahrenheit) and put your pizza stone or baking sheet in the oven as it starts preheating so that it gets nice and hot, then assemble your pizza on a piece of parchment paper and remove the stone/baking sheet from the oven and slide the pizza on. You really can make restaurant-style pizza (or in my opinion, even better) at home and the reward is worth it! 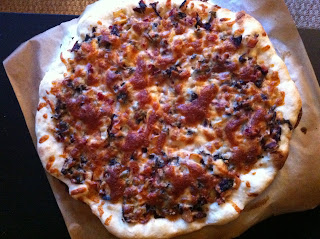 If using store-bought refridgerated dough, make sure to take it out of the fridge about 30 min to 1 hour before making the pizza to allow it to come to room temperature and make it easier to work with.

Place a pizza stone or baking sheet in the oven. Preheat the oven to 500 degrees Fahrenheit.

Chop the onion, garlic, swiss chard (separating the leaves and stalks) and artichoke hearts. Heat 1 T. olive oil in a large skillet or stockpot over medium heat. Add the onion, swiss chard stems, and a pinch of salt and pepper, and cook until softened, about 5 minutes, stirring occassionally. Add the garlic and saute an additional 2 minutes, stirring frequently. Stir in swiss chard leaves, chopped artichoke hearts, and another pinch of salt and pepper, reduce heat to medium low, cover, and cook, stirring occassionally, for about 10 minutes or until the swiss chard has wilted and the entire mixture cooks down.

Meanwhile, lay out a piece of parchment paper large enough to fit your pizza stone or baking sheet, then flour the pizza dough and stretch it out using your fists until you reach your desired size. Place the dough on the parchment paper, then brush it with a light coating of extra virgin olive oil, all the way to the edges, and sprinkle with a little salt. When the chard-onion mixture is done, remove from heat, let cool for just a few minutes, then stir in the grated pecorino cheese. Spread the mixture over the pizza dough in an even but not too thick layer - if you end up with a little extra you can use it as a pasta topping the next day (see below). Sprinkle with the mozzarella cheese, then remove the pizza stone or baking sheet from the oven and slide the pizza on the parchment paper onto the stone/sheet. Bake for approximately 8-12 minutes, or until cheese is golden brown. Let cool for a few minutes, then cut into pieces and serve.

Bonus: Depending on how big your bunch of swiss chard is, you might end up with leftover topping. No worries - I just cooked up some whole wheat penne the next day, tossed it with a little olive oil, and used the extra topping on top of the pasta for lunch. Delicious! 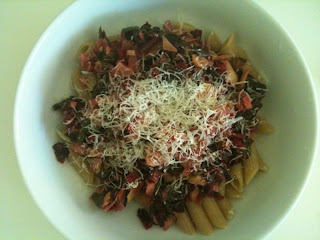