One of my favorite recipes growing up was a Potato-Leek Soup from the Williams-Sonoma Soups cookbook. I have made it dozens of times over the years, but this time wanted to dress it up a little with a few more ingredients and also try making it with vegetable broth instead of chicken broth (Adam and I are in the midst of a no-meat, no-alcohol January to start off the New Year). Other than some chopping at the beginning, this is an easy soup to make, it's very healthy and satisfying, and it tastes even better the next day. Serve with some good bread and a green salad. 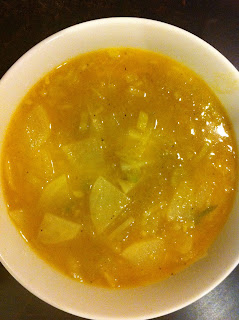 1 T. unsalted butter
2 lb. leeks, thinly sliced, white and light green parts only (soak leeks briefly in a small bowl of water to remove any grit that gets into the leeks)
3 lb. russet potatoes, peeled, cut into eighths (quarter and then slice in half lengthwise again) and then cut into thin slices
1/2 large yellow onion (or 1 small), thinly sliced
A few inside stalks of celery and their leaves, thinly sliced (about 1 c. chopped)
6 c. low-sodium vegetable broth/stock
2 bay leaves
A few springs fresh thyme, or about 1 t. dried thyme
Kosher salt
Black pepper

Heat butter in a large stockpot or dutch oven over medium heat. Add onion, celery, leeks, and 1/2 t. kosher salt and saute until softened, about 5 minutes.

Add the potatoes, vegetable stock, bay leaves, sprigs of thyme (you can leave them on the stem, they will infuse the flavor in the broth and usually just fall off into the soup as it's cooking), 1 t. kosher salt (if using low-sodium broth) and 1/4 t. pepper.

Bring to a low boil, then simmer over low heat, covered, for 30 minutes, until potatoes are cooked. Remove the bay leaves and thyme (if using fresh) and adjust for seasoning, adding more salt and pepper if desired. Ladle into bowls and serve.
Posted by Kate Messmer Wendt at 7:25 AM